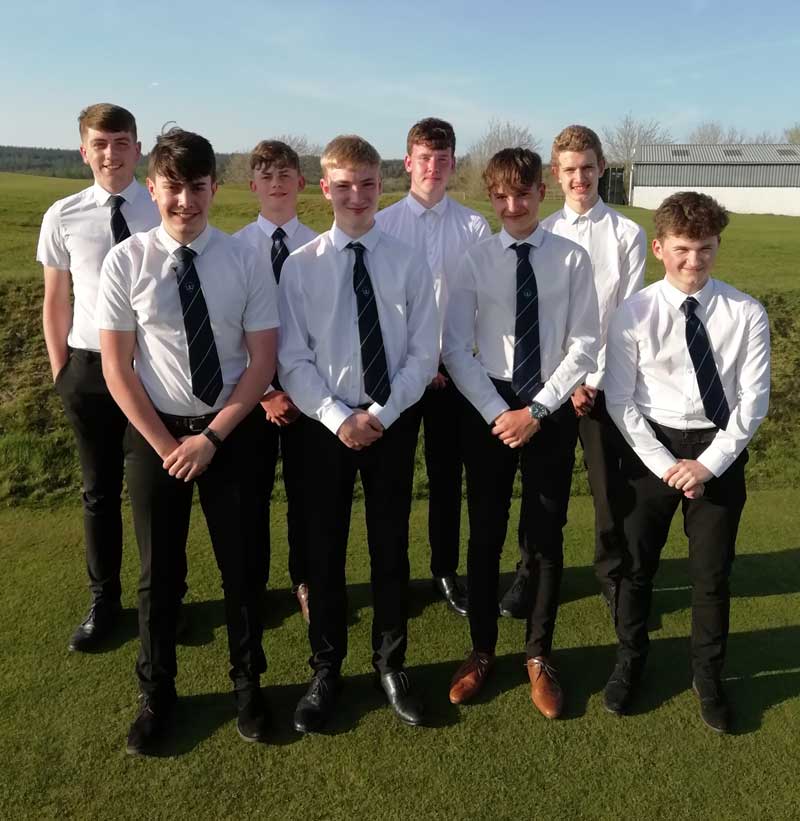 The photograph above shows the victorious South team.

The South Juniors travelled over the border to play their first Northern Counties League match of the season against Cumbria at Cockermouth on Sunday 21April. The course sits on a ridge on one of the fells above the town with beautiful surrounding views. A lovely place to play golf.

The course was in good condition with fast greens for pitching but slow for putting and the weather was great with the sun trying to get through a haze. The wind gradually increased during the day and became troublesome for the late finishers.

Ciaran Howat (D&C) and Colin McKenzie (Lochmaben) led the South boys out in the morning foursomes and were one down after 6 holes but fought back to be leading by two holes after 14 holes and finished by winning 2 & 1. Callum McMillan (Kirkcudbright) and Glen Irvine (D&G) got off to a terrible start being three down after 5 holes but then got the measure of the greens and recovered to be two down after 13 before running out of holes and lost 2 & 1.

The two Portpatrick boys, Sam Mitchell and Kaleb Johnston, who left Stranraer at 6.am, had a titanic struggle. Two up after 3 holes they slowly leaked holes before recovering to be one up playing the last and held on to win 1 up. The final pairing of David Sharp (D&C) and Patrick Innes (Kirkcudbright) also got off to a good start and played steadily to be one up after 17 holes but lost the last for a halved match.

At lunch the South boys had a lead of 2½ games to 1½ and confidence was high for the singles in the afternoon.

The first four matches in the afternoon singles was a disaster for South. Ciaran Howat was looking comfortable at all square after 15 holes but lost 16 and 17 to lose by 2 & 1 while Colin Mckenzie was four down after 8 holes and two down after 15 before also losing 2 & 1. Callum McMillan just had a bad day at the office losing 7 & 6 and Glen Irvine recovered from two down after 8 holes to be one up after 15 and lost on the last green by one hole.

The South boys now had to win the last four games out on the course to record a well earned victory. The Portpatrick boys led the way with Kakeb Johnston putting his tiredness to the back of his mind and playing very steadily to win 5 & 3 while Sam Mitchell got off to a good start and hung on grimly in the strengthening wind to win by two holes.

The singles were shared at 4 games each and a delighted South team won the match by 6½ games to 5½.

Glen Irvine lost to Lewis Cheetham by one hole